Modern systems, whether Intel or AMD, are very sensitive to the speed of RAM. But experiments show that high-performance DDR4 modules ... 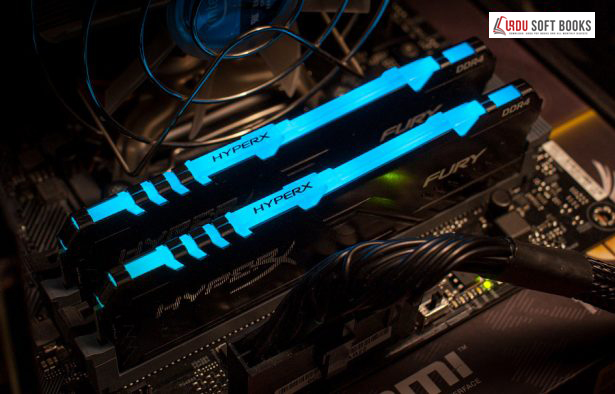 Modern systems, whether Intel or AMD, are very sensitive to the speed of RAM.
But experiments show that high-performance DDR4 modules with frequencies of 3800, 4000 MHz with a significant difference in price, compared with 3000, 3200 MHz, give not such a big gain in speed.

Therefore, DDR4 memory options with frequencies of about 3200 MHz are the golden mean, if you want to add system performance and not spend too much.

Recall that HyperX FURY is a more affordable product than HyperX Predator. A kind of option for prudent enthusiasts, gamers, for whom not only advanced features but also price play a significant role.

All Kingston HyperX FURY DDR4 memory modules are made in the same style as black radiators.

The Kingston HyperX FURY DDR4 RGB HX432C16FB3AK2 / 16 set presented in the test is a memory with a frequency of 3200 MHz, equipped with RGB-backlight and consisting of two modules of 8 GB each. 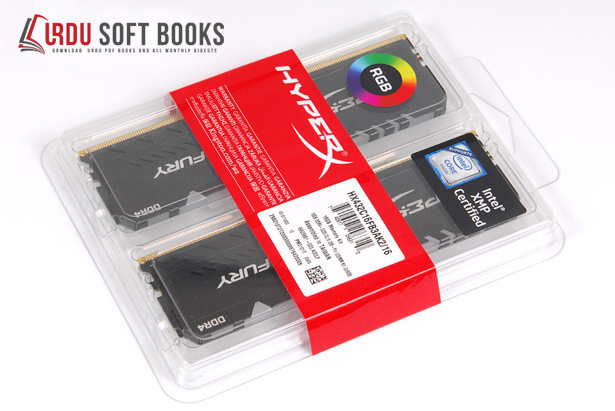 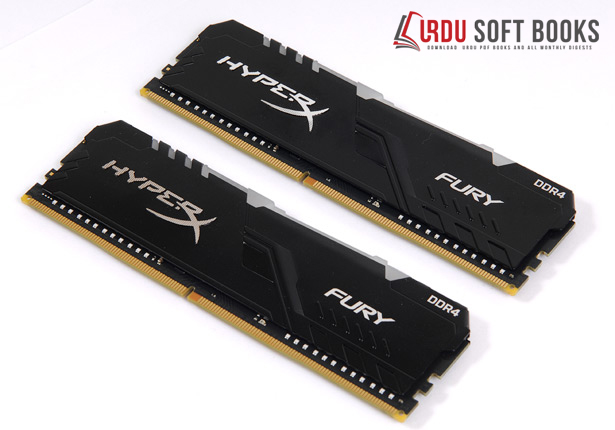 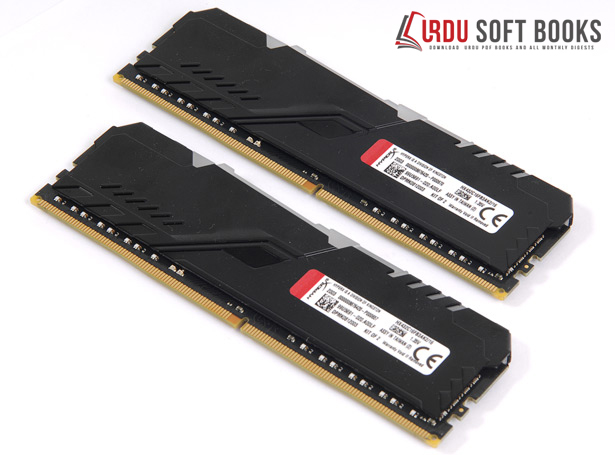 Memory Kingston HyperX FURY DDR4 RGB HX432C16FB3AK2 / 16 comes in a blister. In addition to the modules themselves, you can find a branded sticker and a quick guide in the kit. 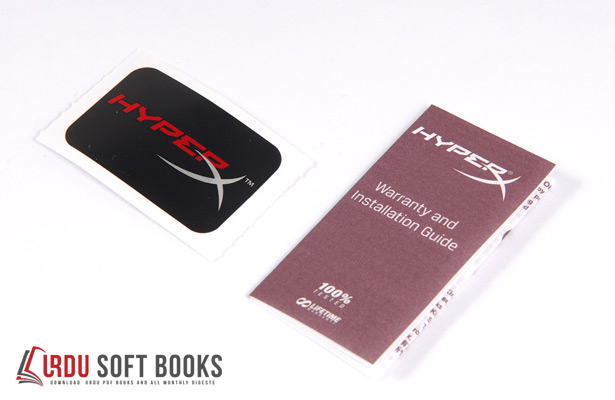 Compared with their counterparts without backlighting, these slats, due to the presence of additional diffusers, were higher. The dimensions are 41.2 mm high versus 34.1 mm for HyperX FURY DDR4 memory without backlight. 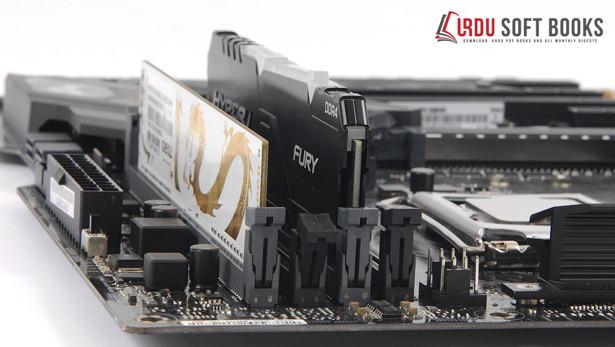 HyperX FURY DDR4 RGB HX432C16FB3AK2 / 16 slightly higher than standard DDR4 modules
In most cases, this does not matter, but if the system uses a large cooler with a “wide” heatsink, such as Aardwolf Performa 10X, then there may be problems installing the module in the first (closest to the processor) slot.

Under a translucent diffuser that stretches along with the entire module, a series of RGB LEDs is placed. 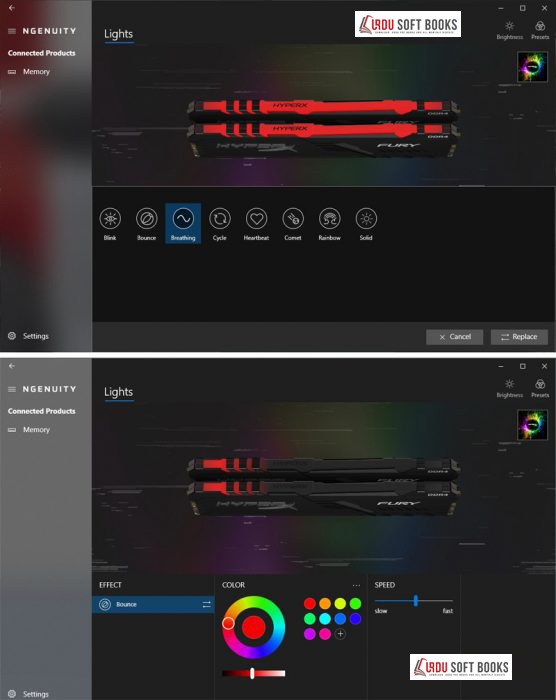 HyperX NGENUITY
It is noteworthy that at the time of this writing, it was available only in beta and was distributed exclusively through the Microsoft Store application market.

In addition, HyperX FURY DDR4 RGB can be synchronized with other computer components through the backlight system of the motherboard (ASUS Aura Sync, MSI Mystic Light, Gigabyte RGB Fusion 2.0, etc.). 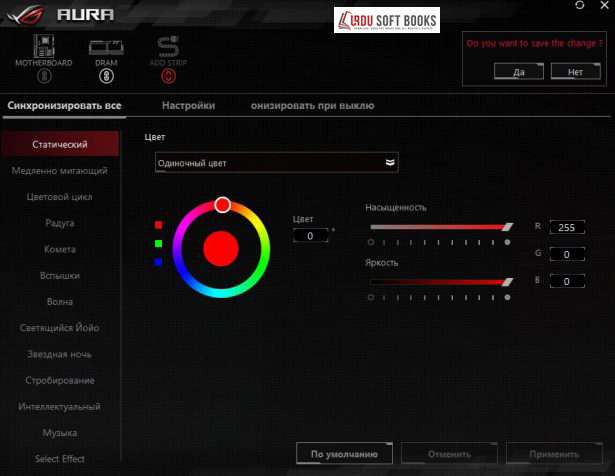 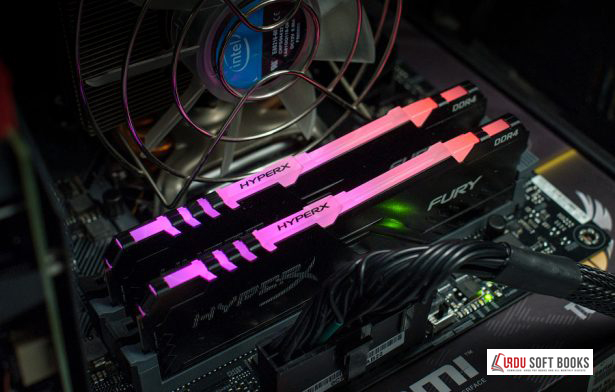 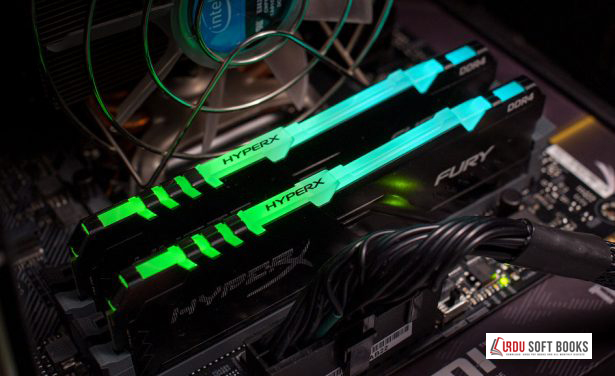 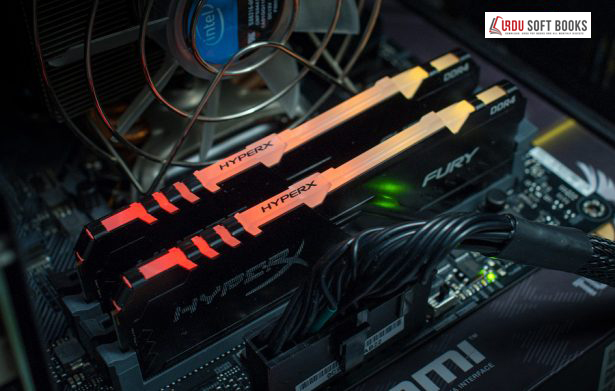 Note an interesting detail. On both sides of the boards are infrared transmitters and receivers (marked in the photo below). With their help, the luminescence and module effects are coordinated among themselves for complete synchronous operation. 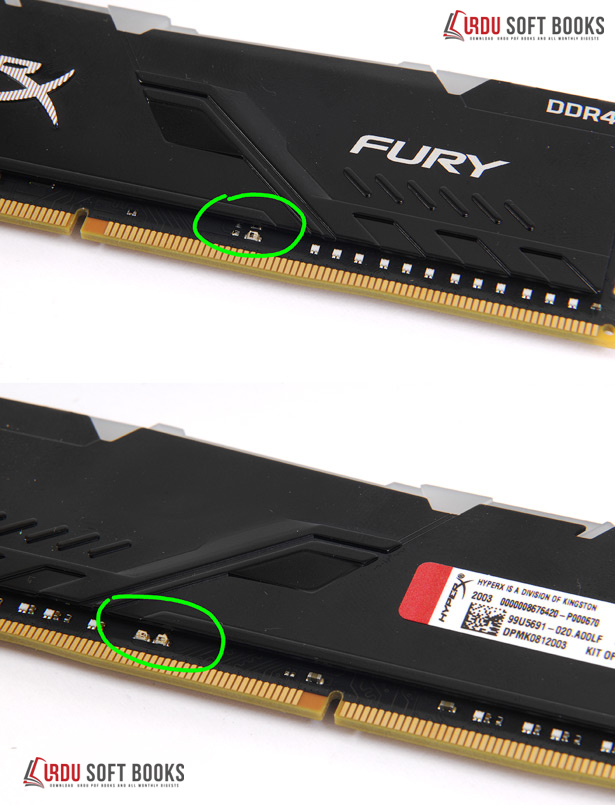 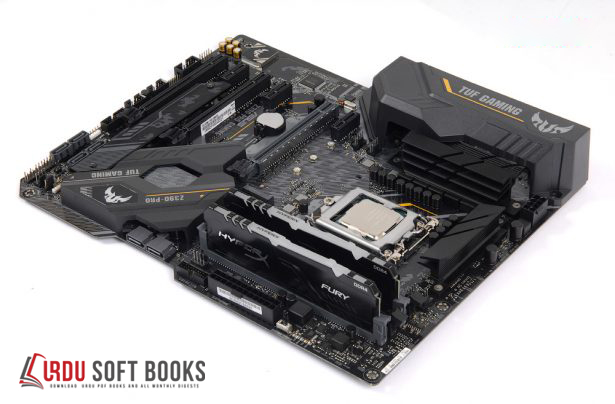 When you turn on the system for the first time after installing the modules, the memory starts at a frequency of 2400 MHz with timings 17-17-17-39 and a voltage of 1.2 V. 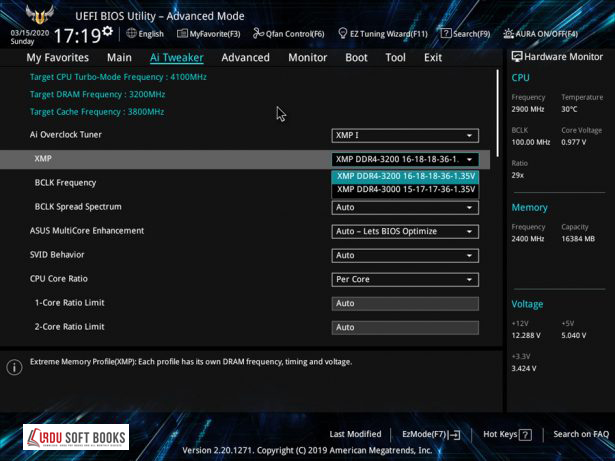 Therefore, in both cases, the memory at higher frequencies is not guaranteed.

But this is in theory, and in practice, the eighth and ninth-generation Intel Core processors usually work without problems with a much higher RAM frequency, for example, 4000 MHz or even more (the capabilities of the DDR4 modules themselves are already a limiting factor).

With AMD systems, the situation is more complicated.

Processors AMD Ryzen architectures ZEN (Ryzen 1000 series) and ZEN + (Ryzen 2000 series) are much more "picky" to the RAM. They require more scrupulous attention to timings, other parameters and have far less high-frequency RAM potential, as is the case with Intel.

The situation has improved significantly in the Ryzen 3000 series processors (ZEN 2 architecture), but, anyway, on Intel platforms, it is better to reveal the maximum RAM capabilities.

It is curious at the same time that the Intel Core i5-9400F system started up with the memory parameter Command Rate 2T, and the system with AMD Ryzen 7 2700 even with a lower (this is good) Command Rate 1T. 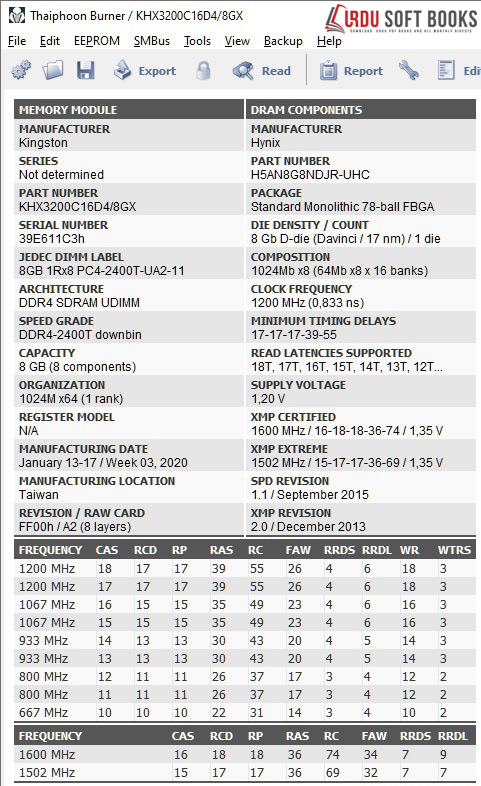 This is very interesting, judging by the information from the hardwareluxx.de forum, where statistics are collected on the types of microcircuits and the names of RAM modules based on them, in many Kingston HyperX FURY DDR4 modules with a frequency of about 3200 MHz, including HyperX FURY DDR4 RGB HX432C16FB3AK2 / 16, Hynix CJR (C-Die) chips are used.

According to rumours, the Hynix D-die is a more modern version of the Hynix C-die with slightly better settings.

The presence of Hynix DJR (D-die) chips in our modules, rather than Hynix CJR (C-Die), is probably related to the production date.

We got a "completely fresh" memory, released in January 2020, for our test.

In experiments related to memory overclocking, it is not out of place to have temperature sensors on the modules. Unfortunately, there are no such sensors in HyperX FURY DDR4 RGB HX432C16FB3AK2 / 16. At least they did not appear in the latest AIDA64 diagnostic application.

During the experiments, we did not set a goal to find some extreme modes for overclocking. It was interesting how the memory would behave when using safe levels of RAM supply voltage and the DRAM controller, and a reasonable balance of frequency and timings.

To check the stability of the work, we used the memory test application, the built-in memory benchmark in AIDA64, and launched 3DMark gaming benchmarks.

Overclocking based on Intel Core i5-9400F

Further steps to increase the frequency required an increase in timings and games with RAM voltage, as well as VCCIO and VCCSA voltages.

They did not experiment further. Surely the memory would start at a frequency of more than 4000 MHz, but this would require an even greater increase in timings.

Overclocking based on AMD Ryzen 7 2700

We managed to subdue the frequency 3333 MHz at the same timings as for the XMP 3200 mode. To do this, we only had to increase the voltage a little to 1.37.

Further, with increasing frequencies, we had to increase the timings

If you used the processor architecture ZEN 2 (Ryzen 3000 processors), the results would probably be a little better. As for the architecture processor ZEN +, it turned out quite worthy.

General observation for both platforms.

An increase in frequency above 3333 MHz is accompanied by a forced increase in timings. Even a significant (within reason) increase in the supply voltage and the controller does not allow setting relatively low timings at higher frequencies.

According to subjective feelings, the memory heatsinks heat up moderately, including when the voltage rises to 1.45 V (a rather high voltage level).

According to the test results, even in the case of computers based on AMD Ryzen processors of the previous generation ZEN +, you don’t really need to worry that the system will start up “in the 3200 MHz memory mode”.

There are certain reserves for overclocking.

The frequency of 3333 MHz is achieved while maintaining the "native" timings. If desired, you can achieve quite high frequencies, but then the timings will be already relatively large.

On the whole, we would call the overclocking potential average. The Hynix DJR (D-die) chips used here are not the option that enthusiasts and fans like to “squeeze all the juices out of the system” usually chase after them.

Kingston HyperX FURY DDR4 RGB HX432C16FB3AK2 / 16 is perfect for users who do not plan any deep experiments.

Installed, launched the pre-installed XMP profile with a frequency of 3200 MHz and enjoy the trouble-free stable operation of the system. 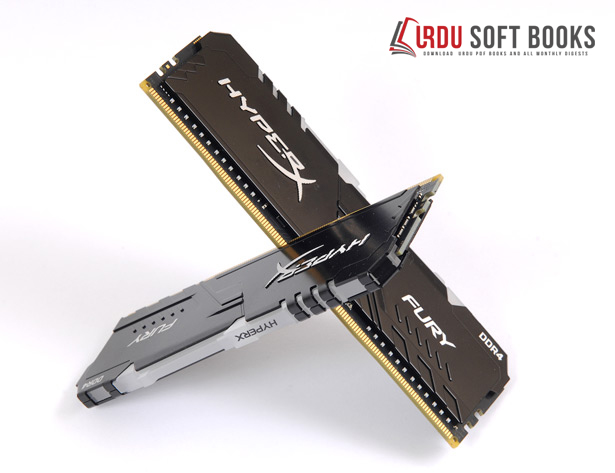 Do not forget that when choosing Kingston HyperX FURY DDR4 RGB HX432C16FB3AK2 / 16, you get a device from a well-known brand that is provided with a long-term “lifetime” guarantee and a reasonable price, given the presence of backlighting.

The backlight itself is very decent and functional, here you can see for yourself what is more important for you ...

Rating:
+ radiators on memory chips
+ peer-to-peer layout
+ adequate cost, given the presence of RGB-backlight
+ warranty "for the entire service life."
+ functional RGB backlight
- in rare cases, the increased height of the modules can lead to difficulties when installing the overall processor cooling system
- no built-in temperature sensors